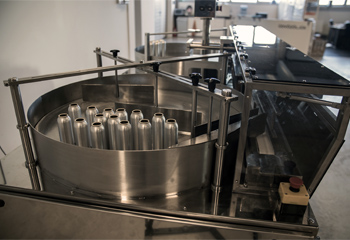 The printing view checking camera system developed by Masterprint is able to verify printings on a concave and glittering surface printed by a CIJ printer.

How is a device able to print on a concave surface without making any damage to the characters? And how is it able to decide if any of the characters is damaged or the printing is illegible? We received an assignment to develop a device able to carry out these tasks, so below we describe how the custom-made printer and checking station with camera (Print&Check) work.

If we buy a product in an aluminum bottle, we hardly ever check what is written on its bottom. It is a real challenge, however, to develop a printing system that can reliably print on concave, glittering or reflecting surfaces with minimal deformation of the characters. This task is even more complicated, when the request of the purchaser also includes that, in accordance with the pharmaceutical standards, the printing shall be checked by a camera system.

A foreign pharmaceutical company, which distributes products to 16 countries, needed such a system. It was also requested that besides printing, the new device shall also check whether the product number and production date are legible on the bottom of the bottle. Because of the special printing surface, we had to be accurate more than usual, and, moreover, we faced a further hardship, namely, the characters were fairly large.

In addition to that, the task was even more complicated as the concave surface of the bottom of bottles was not evenly hollow: its centre was almost flat and the angular offset first gradually, then sharply changed. Hence, larger characters were more deformed at the sides than in the centre, and this deformation also depended on the diameter of the bottle.

The solution is a system comprising two steps. As for the first step, the printing is carried by a Leibinger JET3up small character inkjet printer. Then an Omron camera checks the printing: it reads back the strings one by one from the concave surface and decides whether it is accepted or rejected. Practically, the computer checks an image compensated by a sophisticated algorithm and selects the bottles based on this image.

The camera is aided by a backlight built-in a custom-tailored frame of special material, made by 3D printing, so the concave surface under surveillance is free of shades.

Please view the video to see how the above described device works: