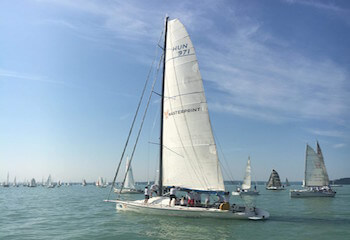 Masterprint’s team finished 16th in its category and 52nd overall at the Kékszalag sailing regatta, and is rather pleased with the result.

The 50th anniversary event of the Kékszalag Erste Grand Prix attracted a record number of contestants. Masterprint’s team competed in a field of 681 sailboats, of which 545 succeeded in finishing the race. Aboard of Spirit of Pleasure, a Nautic 12 Racer, the team crossed the finish line at Balatonfüred on Friday, July 27, at exactly 6:04:59 AM, earning them 16th place in the Yardstick I/1 category. This means that Spirit of Pleasure completed this year’s race at Europe’s longest and oldest lake-circling regatta with a time of 21 hours 4 minutes 59 seconds.

The weather was not gracious with the competitors as the entire competition was beset by low-wind conditions. In light of this, it is even more of an achievement that most boats were able to finish the more than 150-kilometer race. Masterprint’s team was highly satisfied with their overall 52nd place, seeing that this year’s lake-circling event was joined by 19 high-tech catamarans or trimarans, which pose a great challenge to traditional monohull vessels.